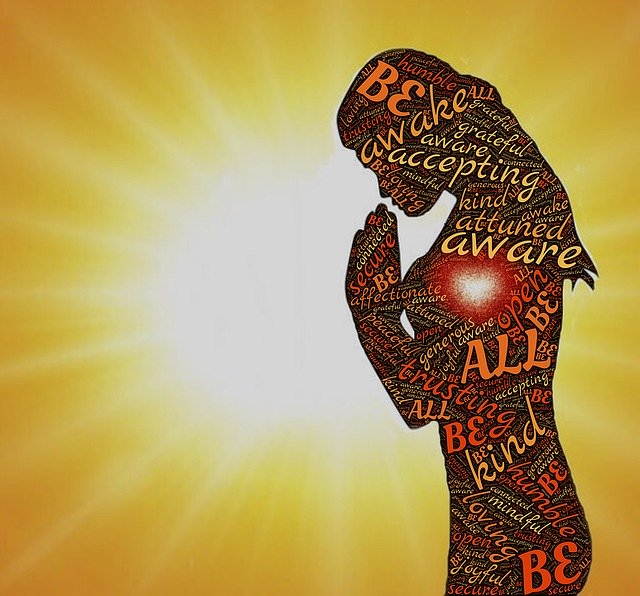 One of my favorite jobs was as a case manager in what was called a “halfway house” for people diagnosed with psychiatric disorders. They were discharged from hospitals but not ready to live on their own. They were a population of vulnerable sweet souls who struggled to exist, and so many of them were unable to utilize defense mechanisms. I saw them as frail, unique people who spoke honestly, simply because they did not have the ability to be deceitful. Many sensed that I liked them and in the time I worked there, some would come to me and say, “God loves you”.

When I think about that now, I wonder if because they were honest and vulnerable people, did they have a special pathway to Spirit  and were delivering a message to me, or were they speaking from their hearts but were too confused about their own identities, or maybe they did have some defense mechanisms after all and found it easier to say God loves me instead of them loving me.

In any case I think about those lovely halfway house residents now, because I am not well and people who care about me tell me that they are saying prayers for me. I am conflicted when people tell me that. I am not a religious person. As a child my mother asked me if I would like to go to religious instruction after school. Well, I was a struggling student in public school and would never agree to more school after school so of course said, “NO”. For me, religion was a set of rules, what you can and cannot do, and of course having wonderful family dinners. As I got older, I learned more about Spirituality which is a better fit for me. I am still learning how to find my way to Spirit.

It’s also important to note that I have never liked asking anyone for anything, so it’s worrisome for me to ask God for favors even though I have been told that He and other Divine Entities are eager to help us here on earth. It makes me wonder, though, what exactly do people mean when they say they are praying for me? I have not actually asked someone to explain that. It might make them feel defensive, “Oh I’m only trying to help”. But, are they asking for God to cure me? Well, if so, isn’t that a bit presumptuous? It is like a mother saying to her child, “Here, let me do that for you” instead of teaching her child to do it themselves.  Because I’d rather do it myself, it brings up the song, “People who need people are the luckiest people in the world” Shouldn’t I be grateful for outside help, whether it’s from people or Other Sources? Am I too independent and can’t that be a bit isolating?

In truth, I do like to do things for myself and when I want help, I will ask for it. When it comes to computer skills, I know my brain has difficulty comprehending certain concepts so I will easily ask for help, or now with coronavirus, it’s not safe to leave home so will welcome assistance but when it comes to my life path, like  someone asking God to look after me, that path is mine alone to walk on. Well-intentioned people asking God to cure me is like an impatient mother telling her child, “Here let me do that for you”

But people who say, “I’ll pray for you” are beautiful well-intentioned people who want to help. It is difficult to see someone you care about suffer and it seems like a natural inclination to try to take it away however as I said in previous writings, we all learn from our difficult paths. The lessons we learn from our own suffering can bring us closer to having a relationship with God, which can be healing. As bystanders, we feel helpless and at a loss for words which is frustrating, and it is difficult to state our intention which is wanting the best for those we care about. So instead we say the next best thing.  It is like my sweet psychiatric patients saying, “God loves you” because they cannot say it themselves. I think the prayers I would like to receive is reassurance, hope, and faith that my path will be an easy one. It is like someone on the sidelines cheering me on as I am running the race.

Perhaps we can all learn how to sit with the discomfort that watching someone suffer causes, and step back from the inclination to take it away and see what else comes up. Perhaps love and compassion will flow and the connection to our loved ones will be the connection we needed. Making connections with people is something we always benefit from.  Asking, “How can I help?” will let our love and compassion shine. It makes such comments like, I will pray for you sound well-meaning but a bit controlling.

I want to end by saying that there are those who continue to believe that their prayers will be answered. It is important to say that if your prayers are not answered, it might not mean that you did not pray hard enough or the person you were praying for was not receptive enough. Perhaps it means that there is another plan in store for us and that when we pray, we are asking God to bestow upon us the lessons and events that are for our highest good. When we can exercise this kind of trust, we are surrendering our control to a higher power.