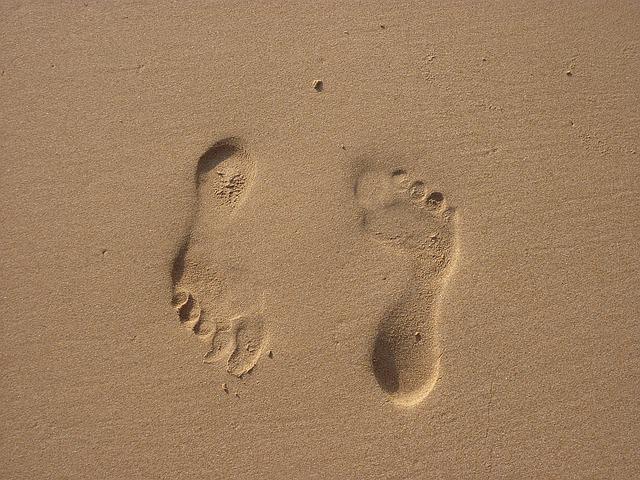 “Pick them up and lay them down!” Why was he saying that to us? What was wrong with the way we moved?  Considering what he made us wear, it’s a miracle we walked at all. They were $3.99 shoes from Miles shoe store, the cheapest shoes in the cheapest store. We’re not holding it against him though, he was doing the best he could with what he had. But if he didn’t want us to drag ourselves around, he should have treated us better. He knew how important feet were, he was in the Army singing marching songs, and he always used Desenex Athletes foot powder, his miracle cure for everything. He even had a theory that it worked well on his balding scalp.

But back to us feet — we always felt sorry for Marilyn, our owner, because she didn’t know how to make him stop yelling. So instead of dragging us around, she would march like a shoulder, which she thought was what he wanted — it wasn’t, it made him angrier.  In all honesty marching did feel better than being dragged around in those tight, uncomfortable shoes. He always wanted us to have shoes with good support — all of the feet in the family are flat just like his were but he always blamed it on our shoes. He blamed our big butts on our mother, and she would frown with guilt because she knew it was true, but he would never take responsibility for us inheriting his flat feet.

So, Marilyn shuffled us along and in addition to yelling at her for dragging us around, he’d always yell at her to sit up straight. We consulted with back and she did indeed tend to have poor posture, we never knew why, but what a sight we were — a hunched over little girl shuffling along. She  often looked a bit sad. Eventually she found out that eyes weren’t working so well either, and doctors had her wearing an eye patch for a while and that made her slump and drag us around even more. People don’t always realize that sad or angry feelings have an impact on us — and not just feet, the whole body suffers. Go talk to stomach and you’ll hear an earful!

In fact, people don’t seem to realize the torture they put us through. They get so caught up in fashion they forget about comfort. Plus, they don’t seem to realize what an important job feet have. We’re pretty small considering all the weight we carry — well over 100 pounds of bone, muscle, fat and flesh and we are only about 10 inches long with little bones, tendons, and ligaments. We work all day long and are often stuffed into small shoes where we are crowded together in such a tight space it’s hard for us to do our job. When we’re stuffed into tight high heels just because it’s the fashion, it ends up hurting so much we have to send some of the pain to knees who  has their own sad story.

Marilyn put us in the flattest shoe that hardly supported us and our non-existent  arches. It hurt so much that bone spurs began to grow on our heels. In an x-ray it looks like a little spur sticking out of a cowboy boot. She bought us special arch supports and began to wear many different kinds of glorious sneakers, nice designs on the outside and all the cushioning that we love on the inside. It’s like resting on a cloud and we sigh with relief whenever she puts them on for us.

These days she treats us well, massaging us and taking us to a podiatrist regularly. She’s careful about the shoes she buys us and in return we walk tall and proud because our owner loves us. Soon, she’ll take us to the beach for our favorite activity of standing by the seashore letting the waves run over us feet while the cool wet sand underneath us drifts towards the ocean causing us to sink deeper into the cool wet sand. What a glorious feeling when the new sand comes up along with the waves and buries us even deeper into the sand until we feel like we are a part of the beach. She does this until we are buried up to the ankles  then gently pulls us up out of the sand, and proceeds to march along the wet sand, picking us up and laying us down.

← The Wink The Tarot Card of Strength →